As you probably know, religion is one of three crucial factors in the Kingdom of Cambodia, apart from the State and the Kings. In Cambodia tours, tourists will have a chance to discover the Cambodian religion which makes Cambodia become must-visit destinations.

Before Buddhism had spread out in Cambodia, Hinduism was one of the Khmer Empire’s official religions, and Angkor Wat is the largest Hindu temple in the world – dedicated to the god Vishnu. It is possible to find Hindu iconography in dozens of temples in Angkor Archaeological Park offering historian evidence of the Kingdom’s religious history. Following back to the Funan Kingdom which ruled between 100BC and 500AD, kings mainly worshiped Vishnu and Shiva. In the early 5th century AD, due to the influence of Hindu trading merchants and the Mon kingdoms, Buddhism was brought to Cambodia. For that reason, Hinduism and Buddhism co-existed peacefully in Cambodia for many years. During the period of the Khmer Empire, Hinduism still maintained to be a prevailed religion, until Jayavarman VII (1181 – 1218) formed Buddhism as the national religion. 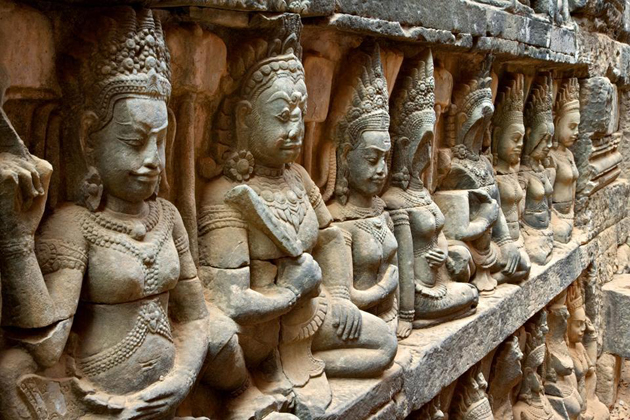 The gradual shift to Buddhism began with Jayavarman VII sent his son to study Theravada Buddhism and be ordained as a Buddist monk. As a result, the position of the god King was replaced by respect for monks. The resources focused on building temples to respect those kings who supported for constructing libraries, hospitals, and educational facilities, which paid much attention to the improvement of the human than the reverence of a Deity. In some way, this also told the reason for the belief exchanging of Khmer people in such a short time. 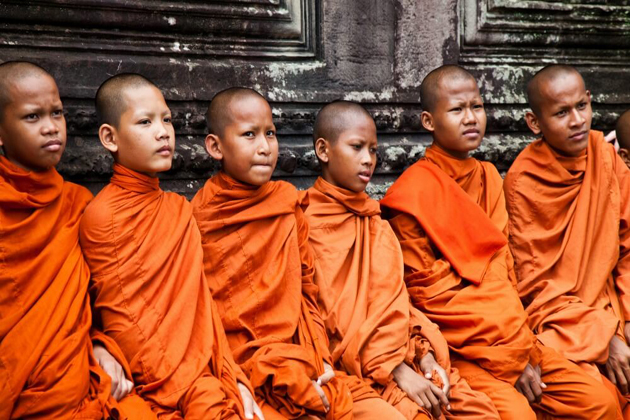 Buddhism in Life of Cambodian People

Buddhism is the official religion of Cambodia. Approximately 97% of the Cambodia population are Buddhist followers. Buddhism mainly focuses on teaching humans about metempsychosis as well as karma. Whatever a man sows, that also shall he reap, every action will get the same consequences. For instance, if you help someone who is on the rock, you will be rewarded with good consequences, and you will have a better life next incarnation. At the same time, bad deeds can lead to bad effects and lower status in the subsequent life cycle. This can be clearly expressed through daily life, with the poor or disabled person, it is believed that it may be the result of actions and deed in a past incarnation. To enable dwellers to live in a happy life, Buddhism has 5 key elements people should follow: 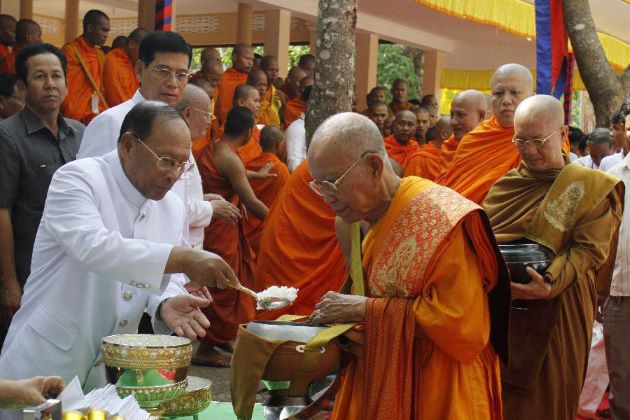 Apart from that, Buddhism also encourages followers to push several common feelings away including suffering, anxiety, and dissatisfaction. This can explain some of the characteristics of Cambodian why they always give you a friendly smile. Even you do something wrong with them, they keep it in their hearts, but they express nothing on their face. They satisfy with all they have, live in the simplest way.

Almost Cambodian annual festivals are connected with the Buddist festivals. The Khmer New Year festival in April, for example, matches with venerations of Buddha statues and offerings at the pagodas. Pchum Ben (festival of the ancestors) in October is celebrated at the end of the traditional 3 months retreat for Buddist monks. Besides, weddings and funerals are presided over by monks and nuns. There is one belief that it would be a luckiness if monks can bless new houses for the couple. It is also common about water blessings in which people are doused from head-to-toe to get fortune and protection. 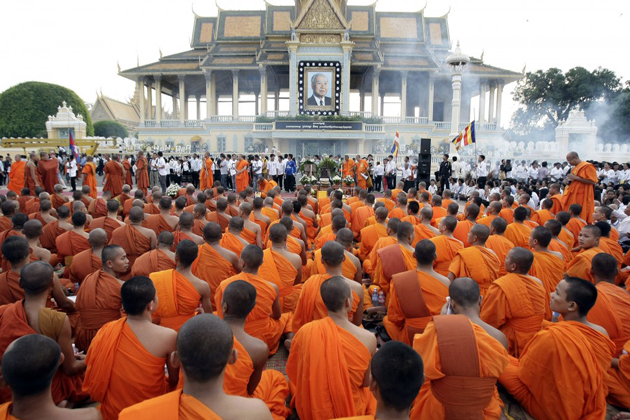 There is a quite strong belief relating to ghosts and spirits in this homeland, particularly in the countryside. Most localities have spirit houses, a miniature wooden house, in which full smell of incense and some offerings used to placate the souls disturbed by local people. These spirits’ beliefs also are shown in healing practices. Cambodian prefer finding help from monks or healers to going to see doctors when they or someone in the family suffer from illness. Especially, in some important decisions in life such as getting married, investing, long travels, etc people tend to visit fortune-tellers. 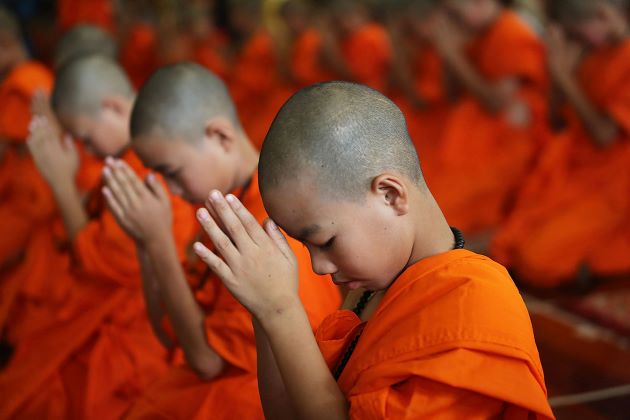 Islam is the religion of a majority of the Cham (Khmer Islam) and Malay minorities in Cambodia. The Cham have their own mosques. In 1962, they have around 100 mosques in the country. At the end of the 19th century, the Muslims in Cambodia formed a unified community under the authority of four religious dignitaries: mupti, tuk kalih, raja kalik, and tvan pake. When Cambodia gained its independence, the Islamic community was under the control of the five-member council who represented the community in contact with other Islamic communities. Each hakem will lead one Muslim community and the mosque. The Chrouy Changvar peninsula is said to be the spiritual center of the Cham and several high Muslim officials reside there. 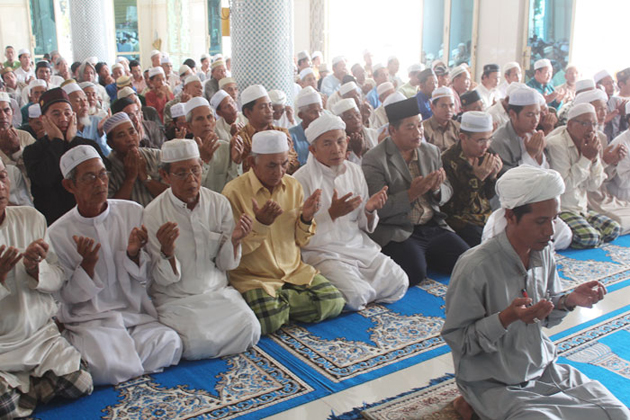 Christianity which was brought to Cambodia centuries ago was undertaken by a Portuguese member of the Dominican Order, in 1555-1556. However, he found it is extremely difficult to replace the strong loyalty of people to their King and his religion. Even with the foundation of the French Protectorate neither Christianity nor grew Catholicism much during the 20th century. After the fall of the Khmer Rouge, the influx of faith-based NGO (Non-governmental organizations) can lead to a slight increase in the awareness of the religion. A remarkable growth in religious population is that of the Church of Jesus Christ of Latter-Day Saints (Mormons), who have established 31 congregations for 15 years. 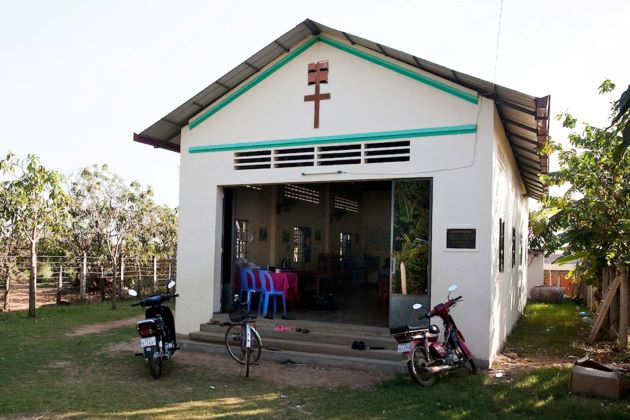 In a word, with an exception of the Khmer Rouge period, when no religion was allowed to exist. Cambodia has been a forbearing country concerning religious attitudes. Buddhism, Hinduism, Islam, and Christianity have all combined together years to years that reflect the Cambodian Lifestyle as well as Unique Culture in Cambodia.