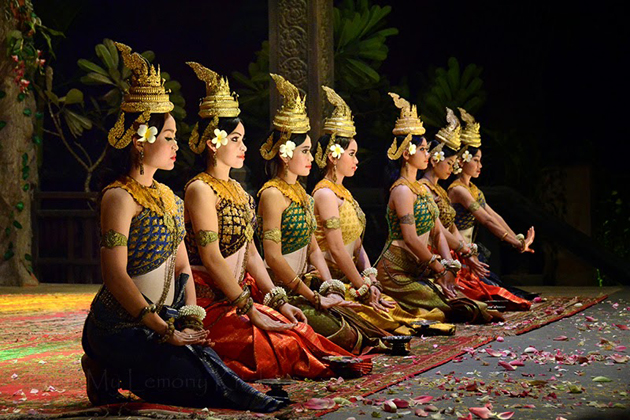 Most of the dance performances today were developed from the 18th to 20th centuries, seriously began in the mid-19th-century renaissance by King Ang Duong. The following Kings and other Khmer royalty also vigorously supported the arts and dance, most notably Queen Sisowath Kossamak Nearireach (former King Norodom Sihanouk’s mother) in the mid-20th century, who not only nourished revived in the development of Khmer traditional dance but also helped to move it out of the Palace and disseminate it. 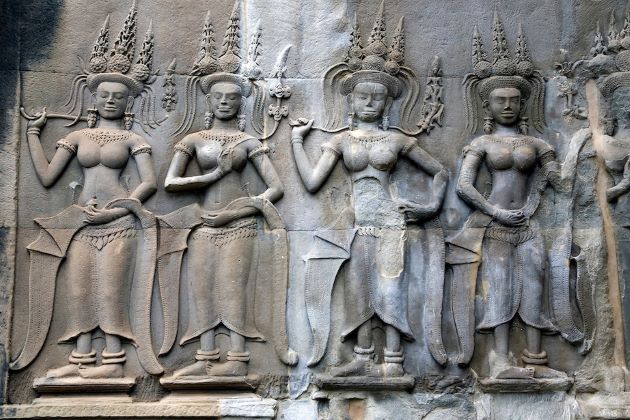 Many traditional dances were refined 1940s-1960s under the sponsorship of Queen Kossamak at the Conservatory of Performing Arts and the Royal University of Fine Arts in Phnom Penh. Her granddaughter, Princess Bopha Devi, was trained in traditional dance from childhood, and she became the face of Khmer traditional dance in the 1950s and 1960s both in Cambodia and abroad. Like most of Cambodian art and culture, traditional dance had almost disappeared under the period of Khmer Rouge in the late 1970s. Then it was reconstructed in the 1980s and 1990s.

The Uniqueness of Cambodian Traditional Dances

Classical dance is the premier performing art form of Cambodia. Performances of classical dance consist of intricately costumed dancers and music played by a pinpeat ensemble. It was performed to call upon the gods and spirits as well as to express respect to the royal courts and guests. In the middle of the 20th century, it popularized to the public and became famous as a symbol of Cambodian culture. At that time, it was often performed during public events, holidays, and tourists visiting Cambodia. 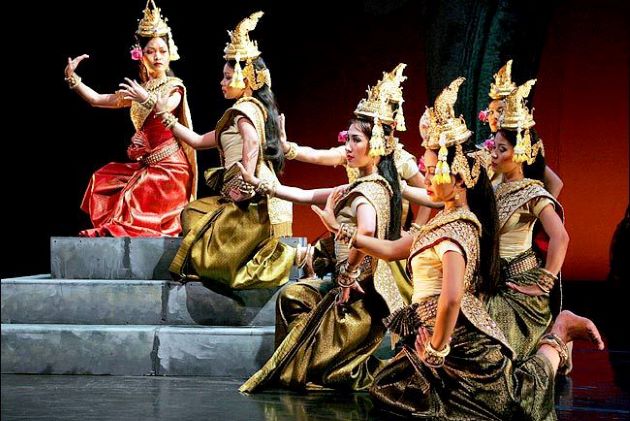 Apsara Dance (Robam Tep Apsara) and Blessing dance (Robam Choun Por) are two of the most performed classical dance. Classical dance has a basic shape, subtle, but still feather-light, ethereal appearance. Especially in ornate costuming, taut posture, bent back and feet, curved fingers, codified facial expressions, slow and close, deliberate but flowing movements, Classical dance is unique of the Khmer. It presents topics and stories inspired by the Reamker (Cambodian version of the Indian classic, Ramayana) and by the Age of Angkor.

The Apsara Dance is created by the Royal Ballet of Cambodia in the middle of the 20th century under the patronage of Queen Sisowath Kossamak. It is performed by a woman wearing a sampot sarabap (a type of silk brocade that is intricately pleated in the front) whose graceful, sinuous gestures are codified to narrate classical myths or religious stories. 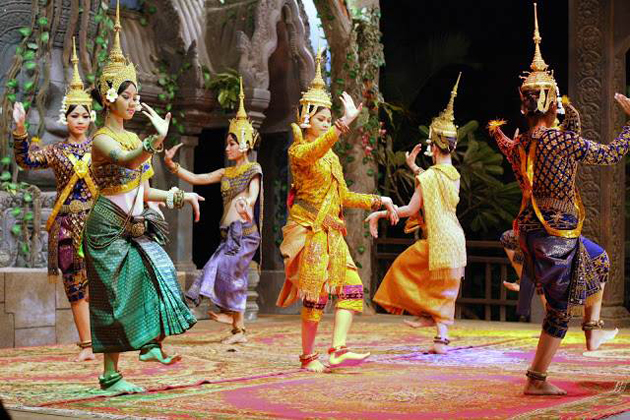 The Apsara Dance was inspired by the apsara carvings and sculptures of Angkor and developed in the late 1940s by Queen Sisowath Kossamak. Her granddaughter, Princess Bopha Devi, was the first star of the Apsara Dance. The main character of the dance, the Apsara Mera, leads her coterie of apsaras through a flower garden where they join in the beauty of the garden. The movements of the dance are distinctly Classical yet, it is shorter, more relaxed, and flowing than most Classical dances because this dance was developed for theatrical presentation. At the same time, the manner and spirit of Classical dance are especially accessible to a modern audience unfamiliar with the Khmer dance style and story.

Blessing dance, or Robam Choun Por, is traditionally presented at the beginning of a ceremony to greet, bless, and offer good wishes to the audience. This dance specializes in charming and gentle movements, holding golden goblets. Inside the goblets are flower blossoms such as jasmine, lotus, or Romdoul blossoms. The female dancers costumed in Khmer Classical Royal Ballet to symbolize the Devata, who carry the golden treys with jasmine and scatter the flower to their guests with honor and wishful blessing. The blessing dance performance is played by a group of young Khmer girls (3, 5, or 7 people) to wish for good health, happiness prosperity, and success. 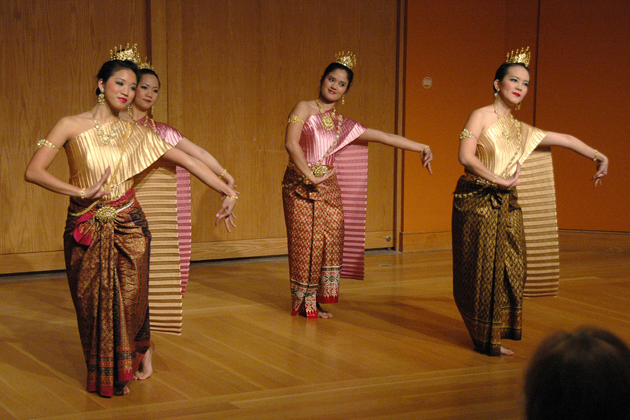 The folk dance, which was created in the 20th century, highlights the various cultural tradition and ethnic groups of Cambodia. Folk dance in Cambodia is usually faster than classical dances, its movements and gesture are not as stylized as classical dance. Folk dancers usually wear Chams, hill tribes, farmers, and peasants. 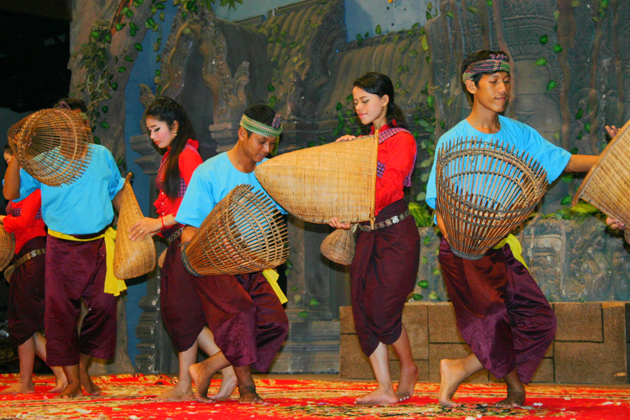 The folk dance consists of 2 forms: Ceremonial and Theatrical, however, only Theatrical Folk Dance is performed in public, Ceremonial Folk Dance is reserved for the particular ritual, celebrations, and holidays. Theatrical Folk Dances including the popular Good Harvest Dance and the romantic Fishing Dance, which adapted from dances found in some rural areas or inspired by countryside life and practices. This type was developed at RUFA in Phnom Penh in the 1960s as a part of an effort to conserve and remain this Khmer culture and arts. Most of the dance performances in Siem Reap bring a combination of Classical and Theatrical Folk dances. They consist of 4-6 individual dances, often opening with an Apsara Dance and followed by 2 other Classical dances and 2 or 3 Theatrical Folk dances.

The ancient art of shadow puppetry is a kind of sacred tradition from the time of Angkor. Today, it comes in 2 forms: Sbek Thom with big puppets that are actually panels depicting certain characters from the story, and Sbek Thoch with small articulated puppets. The black puppet is held in front of a light source, either in front of or behind a screen, creating a shadow or shadow effect. Sbaek is a unique Cambodian performance, with bas-reliefs from the 7th century Sambor Prei Kuk temple complex in Kampong Thom, featuring female puppets using figurines in a ceremony. It is believed that the art form has originated in Siem Reap in which performances mainly took place in the rice field or temple as part of ceremonies, rituals, or birthdays for monks or other important members of the community. 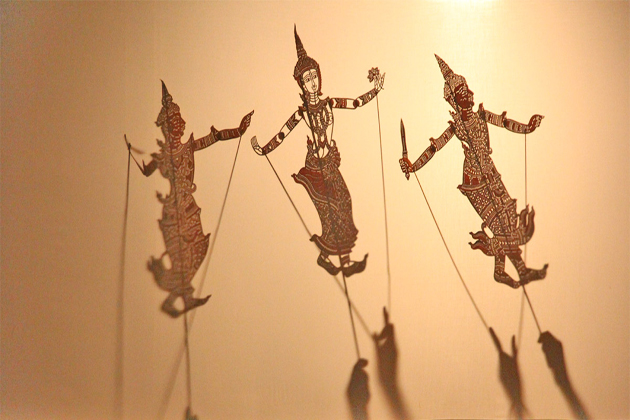 If you fancy Cambodia culture as well as the traditional shows, taste the show makes your trip to Cambodia more colorful!