Standing at the heart of Jayavarman’s capital, Angkor Thom, Bayon temple is the most impressive construction of Cambodian temple architecture due to its grandeur both in scale and emotions that it brings to travelers. During Cambodia tours, you probably do not know much about this, you may not understand the characteristics of Cambodian People, even do not know which countries it bordered with. But stone faces, with a unique name “Bayon’s Smile”,  surely leave you amazing experiences. Bayon temple consists of 54 large and small Gothic towers with 216 enormous sculptures of the smiling face of Lokesvara, or Avalokitesvara, which symbolizes the divine observation of the four directions of Cambodia. It shows the creative genius of the most famous king in Cambodia. 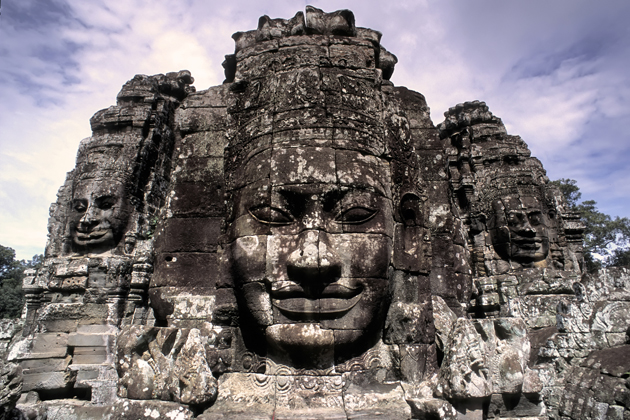 The Bayon Temple is located at the exact center of Angkor Thom, about one and a half miles from the gate. Bayon is a refined temple with beautifully carved stone carvings. Built-in the late 12th and early 13th centuries as the official temple of King Jayavarman VII, Mahayana is believed to be different from Hinduism as previous kings but still follow the goddess tradition. King Jayavarman VII converted to Mahayana because of previous kings who succeeded King Hindu Suryavarman II who built Angkor Wat to defeat Champa. After the death of Jayavarman VII, kings who followed Hinduism, Theravada Buddhism, built more temples based on their beliefs. Thus, needless to say, the temple is a shift in religious exchange from Hinduism to Mahayana Buddhism. It is also a monument to Jayavarman VII. 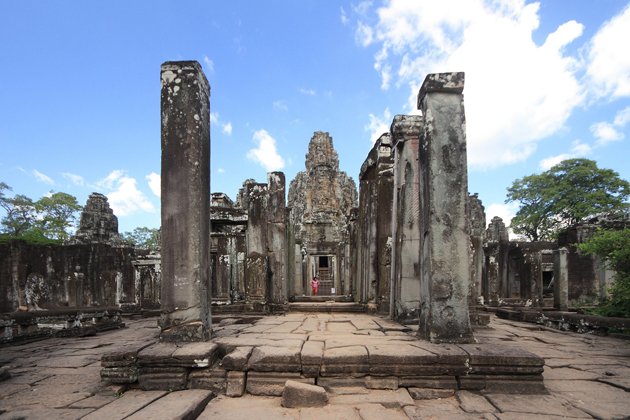 The History of Bayon Temple

Bayon is considered as the central temple of Angkor Thom – also known as Yaxodarapura. In order to carry out the nation’s liberation mission, Jayavarman VII began rebuilding his army before the throne and then began a series of counterattacks, including an elaborate naval battle described on a rock wall in the Bayon Temples and Bantay Chrma. After peace was restored, Jayavarman VII was on the throne at the age of 50. He immediately embarked on the restoration of the capital and built a new city called Yaxodarapura.

Bayon Temple consists of three floors full of brick laid everywhere. On the first and the second floor, it is arranged in a square, adorned with reliefs on the wall. The third floor shaped like a circle with many towers having faces-shaped stones. The downstairs lobby is an art gallery with 11,000 sculptures engraved on a 1200 meters rock wall. 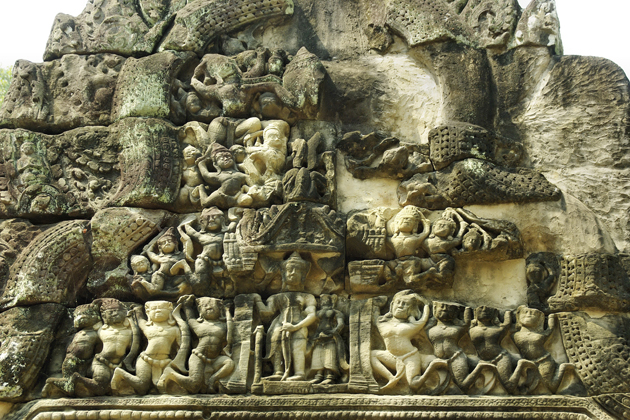 Each stone face is four meters in height and is facing one of the cardinal directions of the compass. They all have the same gentle smile, with eyes closed, like a way of understanding thoroughly about a state of inner peace, even a state of Nirvana. The faces have caused controversy for who they actually represent. Some theories believe that they are the face of King Jayavarman VII while others claim they are of Bodhisattva (Buddhism’s compassionate and enlightened being), even a number of scholars declare they are the combination of Buddha and King Jayavarman.

To explore all in the Bayon Temple, you should spend 30-40 minutes on this tour, because it involves lots of narrow corridors, steep flights of stairs and towers. Due to its iconic visages, when you walk around, it feels like you are watched by thousands of looks, from different directions, full face or just in profile, sometimes are at eye level, sometimes are higher and are looking down. Thanks to its fame, one of the most popular structures in the area and a feature of virtually all tours, both organized or independent, it can get a little crowded. Anyway, it is not quite difficult to find somewhere cool and quiet to explore. 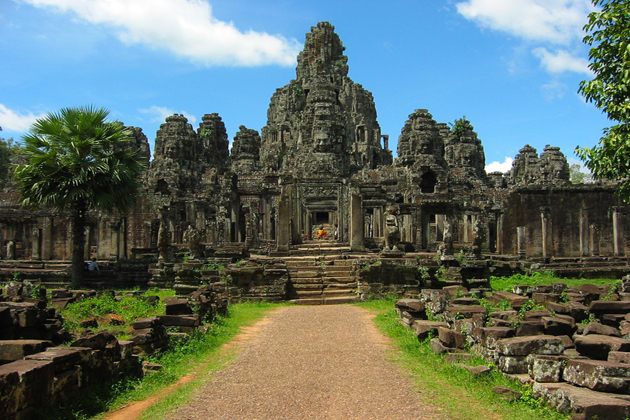 If you take a look at the southern wall, there will be scenes from a sea battle between the Khmer and the Cham. However, it is not clear whether they represent the invasion of the Cham in 1177 AD or a victory battle for the Khmer. Besides, the wall also depicted numerous vivid images from daily life such as market scenes, religious rituals, cockfighting, and childbirth. The most noticeable thing on the wall is some unfinished carvings, which is possible because of the death of Jayavarman VII. Under later kings, Bayon had experienced some additions and modifications, and some of the reliefs on the inner walls were engraved under the Hindu king Jayavarman VIII.

Since the Bayon temple was built in stages over a period of many years, it seemed to be a bit of an architectural mess. When viewed from a distance, it may seem like a mess instead of an invisible stone, while the interior is a maze of galleries, towers, and walkways on three different levels. The best time to take pictures is when the sun is quite low, near the sunrise and sunset, as this will give details in the relief. The entrance fee to visit Bayon temple, as well as Angkor Thom, ranges from about $37 to 72$ based on the number of days you want to visit this relic.