Similar to other countries, marriage is an important event in Cambodia. However, perhaps you will be surprised because many Cambodian young people today are still following arranged marriages to know each other through matchmakers. Besides, premarital sex is unacceptable in this country, especially women. They often get married so early; the girls in rural areas even marry as teenagers. 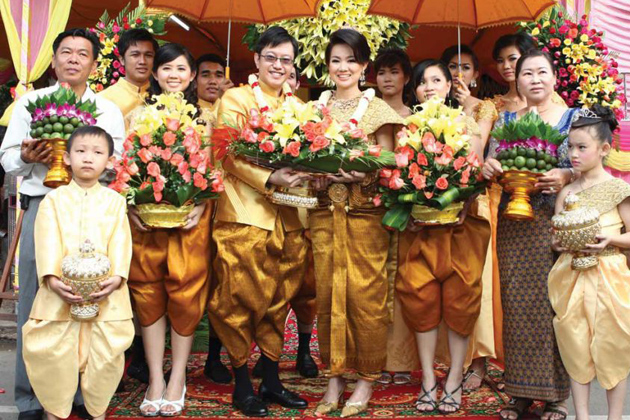 A traditional wedding in Cambodia is a long, complicated, and expensive affair that lasts for days, requiring many multiple ceremonies with various kinds of outfits and money. These ceremonies often relate to ancient mythical Khmer stories. Traditionally, depending on the condition of the families, some rich families will hold weddings lasting a week, whereas, indigent people only have one-day-lasting weddings. In these days in Cambodia travel package, if you’re lucky, don’t miss the chance to join with them. Nowadays, due to the development of the world, wedding ceremonies in Cambodia are usually completed in just one day, including the following rituals:

Firstly, the groom and his family go to the bride’s house, bringing presents known as the dowry. All of the family members, as well as the groom’s friends, are introduced in turn. After that, the groom and the bride exchange the wedding rings. In the dowry ceremony, there are three traditional songs performed:

A song about the groom and his family’s journey to the bride’s house with the offerings including meats, fruits, cake, drinks…

This is the conversation between the matchmakers, parents, relatives, and friends of both the bride and groom. Now, the groom’s side will officially give the dowry to the bride’s family.

In this section, the elders sit to chew betel nuts and the parents will give blessings for the pair. 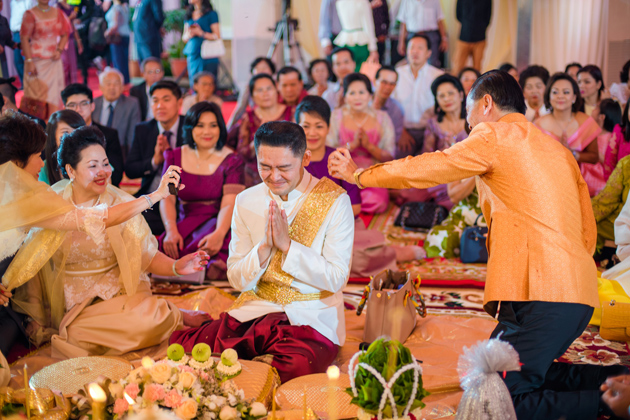 This tradition has existed for many ages, in which the bride and groom will offer tea to express gratitude to their ancestors.

In this ritual, the groom and the bride are cut their hair. This means they will start a new life, a new relationship. It is done symbolically by the master of the ceremony first. While cutting, he gives the best wishes for the couple such as happiness, prosperity, and longevity. Then the parents, friends, relatives in turn also cut the bride and groom’s hair and give the blessings too. In the past, the groom and bride’s hair were really cut in the ceremony, are not done symbolically as it today. There are two songs in this ceremony:

The song praises the bride’s beauty and considers it as the beauty of cardinal birds.

The song draws the image of a pond with fresh clear water where the bride brings water to take the bath. Besides, it symbolizes the beginning of the bride and the groom in the new life as wife and husband. 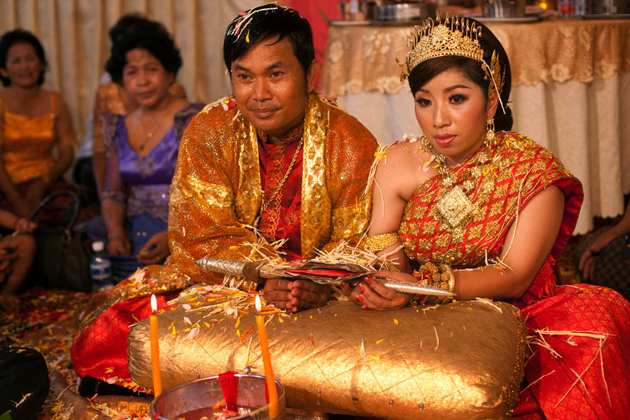 This is the final ritual of the wedding. All the people of two families will, in turn, tie the bride and groom’s wrists together with blessing strings. Every best wishes and blessing of happiness, success, richness, good health…are said in the rowdy sound of gongs. At the end of the ceremony, the guests will throw palm flowers over the couple for congratulating.

Four songs are presented during this ceremony:

The bride and her bridesmaids are invited to the pairing ceremony. Then a female relative takes the bride into the room.

A melody played when the couple offers the gifts to the ancestor, asking for their blessings.

Married couples are allowed to sit around the bride and groom while the sacred flame is rotated seven times around the couple. The burning flame of the candle symbolizes the anger, which the couple should avoid to keep a harmonious relationship, and the smoke of the flame is to protect them from all evils. Family members move their hands over the sacred flame to lead the smoke to the new couple.

This song is sung in order to congratulate the new relationship and to wish the happiness while the bride and groom’s wrists are tied with the blessing strings.

After all, get more understand about Cambodian Wedding Custom, during Cambodia local tour, if your friend invites you to attend a Cambodian wedding, don’t be hesitate, join us with fun!