The powerful Khmer Empire that was not inferior to the ancient Chinese Empire existed for a long time in Cambodia as the most prosperous era of this country. It even extended the border over Thailand, Laos, and Vietnam. As a result, there was a diversity of Cambodia traditional musical instruments in which many of them are still preserved and developed until now. Take a Cambodia tour with us and find the specialty of Cambodian Musical Instruments.

In addition to the famous landscapes, festivals, eating and drinking,… traditional musical instruments are also one of the important factors that make the diversity and attraction of Cambodia culture. 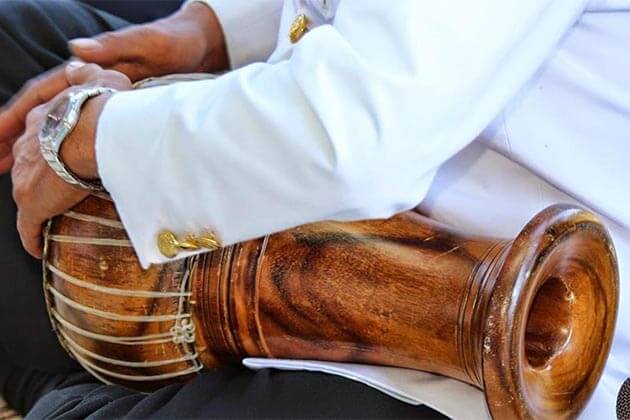 Traditional Cambodian musical instruments used in the traditional and classical music ceremonies and events of Cambodia. They comprise a wide range of wind, string, and percussion instruments, used by both the Khmer majority as well as the nation’s ethnic minorities. According to German musicologist Ingo Stoevesandt, depending on the nature of each event or festival, people will use various musical instruments of different ethnic groups. He points out that these properties are mostly related to religion, social function and the peculiar thing about the Cambodian folk musical instruments are that they are rarely played solo, but they are often used in combination. 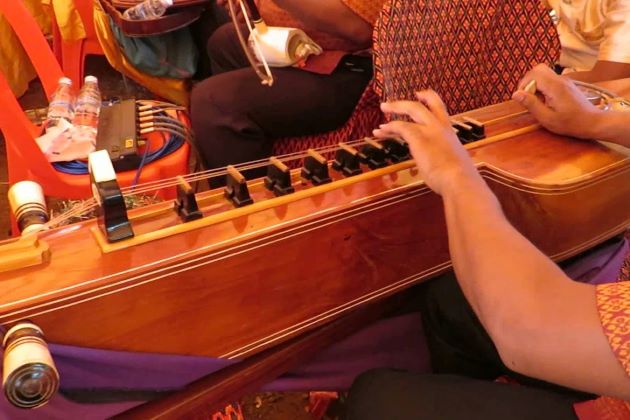 You can hear and see many traditional Cambodian instruments via the media but whether you ever touched or even played them? A Cambodia tour will bring a perfect opportunity for you to do all of those activities. If you are a visitor to Cambodia, you can go from surprise to surprise when you realize that you are a real Cambodian instrumentalist. Or if you are a musician who wants to explore instruments in Cambodia then you will not be disappointed because of the interest of the ethnic instruments here. There are many other types of Cambodian musical instruments to experience such as Takhe, Chapei Dang Veng, Kse Diev,…

Takhe may be the most popular musical instrument in Cambodia. A Takhe is propped by from three to five legs. When performing, the player sits beside it, the left-hand runs up and down the strings while the other one plucks that strings with a plectrum. 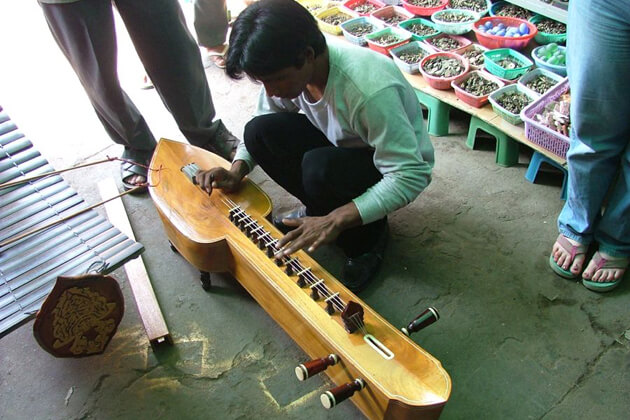 Takhe means crocodile because from above, it looks like a crocodile. Besides, the frets are also similar to crocodile’s teeth. Earlier, Cambodian people often carved the image of a crocodile on the instrument but today, this occurs uncommonly.

A traditional Takhe is a rectangular shape with a pointed front part and the body (called “Thung” in the Cambodian language) is bigger. “Thung” is often made of a kind of hardwood such as “Khnor” that there are twelve frets on the soundboard. Besides, there are three tuning pegs and a bridge that helps to elevate the strings. All of them are made from the animal’s bone or hardwood. The strings are made of metal or bronze, and the tailpiece is usually made from a thin piece of bronze. 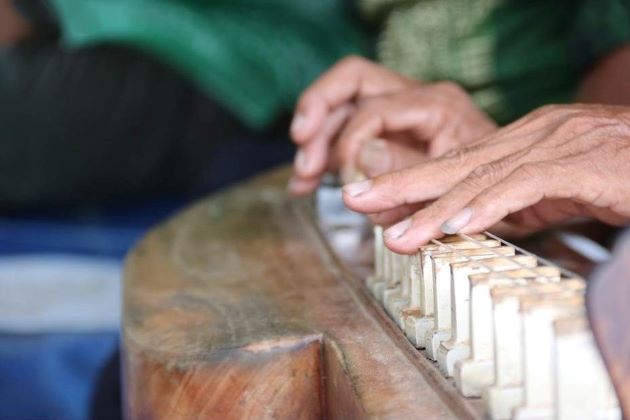 Takhe is often used in wedding ceremonies. Besides, nowadays, it is played in modern music shows. The quality of the sound of Takhe depends much on the skill of the musician.

Chapei Dang Veng is a solo instrument that is played when the musician tells folk stories in traditional wedding ceremonies. It is very popular in Cambodian traditional weddings, which is a favorite musical instrument of the locals. Besides, it is used as a background in a fun duel of words between two people. The wood for making Chapei Dang Veng is carefully chosen, so its sound is very beautiful, attracting the listeners. 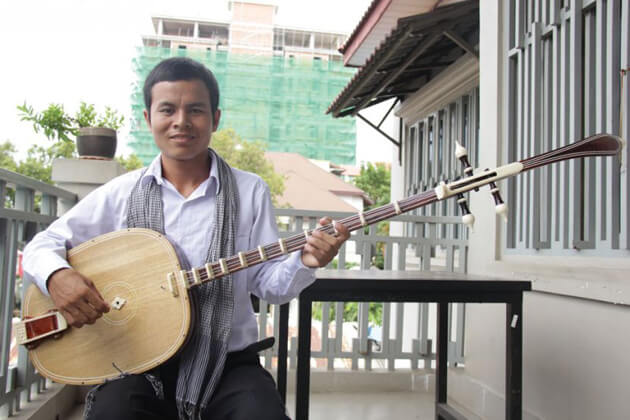 A Chapei Dang Veng has a long neck made of Krasang – a special kind of wood that can resist the steam and the bending. The neck leads to a square sound box made of Rang wood; sometimes it has the shape of a pineapple. This box has the role of adjusting the sound. On the top of the neck, there are three or four wooden tuning pegs and four silk strings. There are twelve frets on the soundboard that each of them has a small cut on them to prevent the string from slipping as well as to help maintain the tension.

Kse Diev (also called Sadiev) is supposed to be one of the most ancient Khmer musical instruments in Cambodia. Tourists can encounter the images of this instrument on the carvings in many Angkor structures. Kse Diev is also played in wedding ceremonies, telling Khmer folktales. However, it is no longer too popular these days because it is very difficult to play this instrument. 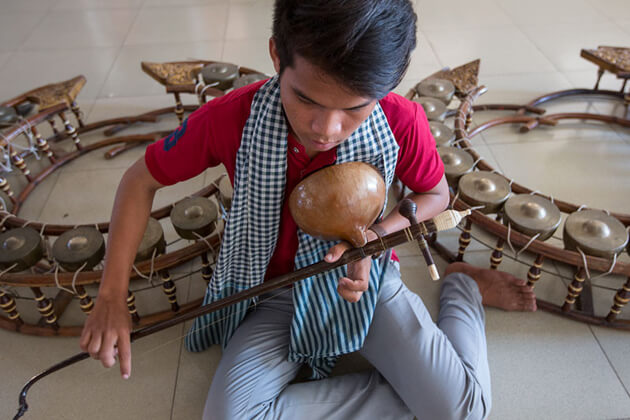 Kse Diev is made from half of a dried gourd; it plays the role of the soundbox. When performing, the musician puts the open side of the gourd across the chest; the chest cavity is like as a sound resonator. The closed side is attached to a piece of wood of about 40 cm long. There is only one string connecting the two ends. It can be made of cotton or any strong vegetable fiber. The neck and the tuning pegs are made of hardwood. The neck is usually carved with the image of a snake’s head, sometimes it is decorated with ivory. 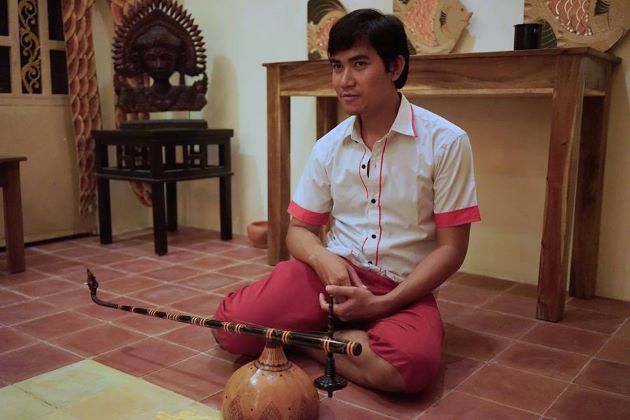 When playing Kse Diev, musicians use a fake nail which is often made of copper, worn on the fourth finger of the right hand, whereas, the fingers on the left hand run up and down the string as well as close to the soundbox.