The Kingdom of Cambodia is one of the new and most attractive tourist destinations in the world. After more than 25 years of isolation, Cambodia opened to welcome tourists in the early 1990s and the number of tourists has increased year by year.
Cambodia’s most fascinating tourist attractions are Angkor Wat and Angkor’s temples in Siem Reap, as well as the fascinating cultural sites of Phnom Penh and Sihanoukville’s beaches with full of essential services such as hotels, restaurants, entertainment spots and a number of other tourist services. In addition, Cambodia has many traditional festivals of the people of this country.
Most popular festivals in Cambodia are often associated with Theravada Buddhist rituals. They have profoundly affected the lives of the people. Even the bloody war of the Khmer Rouge could not eradicate these holidays. If you take a tour in Cambodia at the time of the festival, you will see many custom and religious specialties of local people.

This is a very special holiday for the Cambodian people as it marks the event of the country escaping the genocide of the Khmer Rouge. On this day, parades are usually organized by the Cambodian government to commemorate the lost victims. 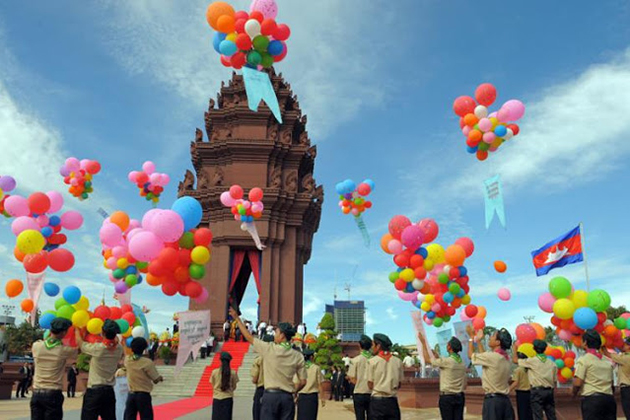 Meak Bochea is a very important festival in Cambodia. It was organized to honor the Buddha and his teachings. Often held on the full moon day of the third lunar month, Buddhist celebrates by taking candles in a nearby temple.
If you would like to participate in this festival, please select the following times to visit Cambodia. The corresponding Meak Bochea festival falls into the following period:
• January 31, 2018
• 18 February – 2019
• 8 February 2020

On New Year’s Day, all over Cambodia celebrate the New Year – Chol Chnam Thmay. During the three holidays (13 – 15 April each year), the atmosphere of Cambodia is bustling, bright lights from the temple to the roads leading to the Royal Palace.
New Year’s Eve, people make beautiful lanterns and bring them out on the lake. Thousands of lights drifting into a flower festival and it is believed that the lights of the house which is both beautiful and clear all night, then the house will meet many good things.
On this April, millions of Cambodian tourists are looking forward to the spectacular Water Festival in Chol Chnam Thmay (Cambodia) from April 13-15. Instead of blessing the beginning of the year, the people of this country will jubilantly welcome the New Year with water ritual ceremony on each other. 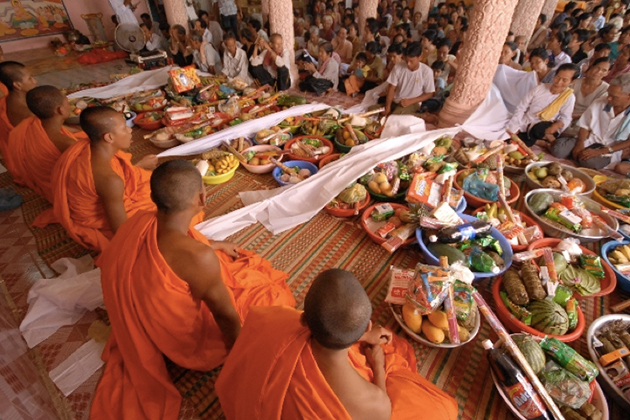 The biggest festival in Cambodia is the Bom Chaul Chnam (Successful Rice Harvest Festival), held on April 13th to 15th. This is the biggest festival of the year in Cambodia. This festival is also held in Laos, Thailand, and Myanmar – countries with agricultural civilization.
In this festival, people meet and splash water together in the hope of a higher-yielding crop next year. After religious rituals in the temples, people come to the streets, use guns, sinks, fountains or broken water together, then splash into houses, animals and tools. The comfortable bath in the water, receiving water drops as much as possible because they believe there will be more luck in the new year.

Vesaka Bochea is one of the three important milestones of the Buddha: birth, enlightenment and nirvana. The Buddhists will perform the ceremony at the temple and give food, clothes for the local monks. This is one of the most holidays of the general concern in Southeast Asia. The Vesaka Bochea is held in many places where Buddhism is the main religion.
In Cambodia, the Vesaka Bochea is celebrated on the full moon day of the sixth lunar month of the Khmer calendar corresponding to the following calendar:
• April 29 – 2018
• May 18 – 2019
• May 06 – 2020 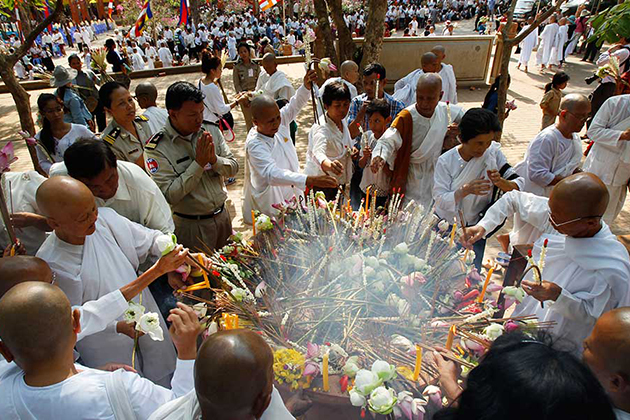 Preah Neanng Korl Festival – one of the most meaningful festivals of the Khmer people.
Every year, Preah Neanng Korl Festival by the Cambodian Crown Prince will be held in May, according to the ancient Khmer calendar. This is also the beginning of the rainy season in Cambodia.
Although today there are many other methods, such as the application of science to forecast the regret, to cultivate the crops of the year to be effective in harvesting. The Kingdom of Cambodia has its own methodology for pointing to the future through traditional royal ceremonies.
The Royal Plain Festival is held on the fourth day of the sixth lunar month, corresponding to the calendar as follows:
• April 18 – 2018
• May 7 – 2019
• 25 April 2020 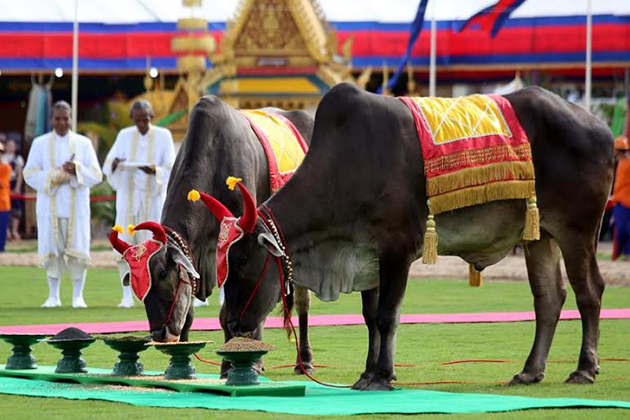 This festival is held to commemorate the deceased. These days, people come to the pagoda and give thanks to the monks. Monks were also offered a 15-day holiday without begging for food, people give food to monks.
Pchum Ben is a very sacred holiday for the Cambodian people. On this day, they often visit at least seven temples to offer prayers for their loved ones who have died and light candles to guide the soul. The Khmer also spread rice on the courtyard around the temple so that the ancestors could eat.
Pchum Ben was held on October 15th in the Khmer lunar calendar but lasted one and a half days later. According to the calendar, Pchum Ben will take place on the following days:
• 8 to 10 October – 2018
• 27 to 29 September 2019
• 16 to 18 September 2020

This is the anniversary of the independence of Cambodia after the French colonial rule. An independent monument located in central Phnom Penh is lit up by the flames of victory in the presence of the entire Cambodian population. There are also some cultural activities, parades on Norodom Boulevard and fireworks in the evening. Guests can visit the Monument Independence during their Cambodia tour.

The Bon Om Touk or Boat racing festival is held in front of the Royal Palace of Cambodia on November 15th of the lunar month. Khmer boat racing festival shows the characteristics of national media, talent, agility, patience, art, happiness, peace, community solidarity, national pride. above all patriotism as well as a sense of national defense, protection of the territory, protection of the nation.
The festival is both a competition, as well as a festival to thank the Buddha for a bumper harvest and the desire for warmth. An opportunity to revisit the indivisible power of the navy forces of the ancient Khmer Empire and introduce the diversity of waterways of the Khmer. 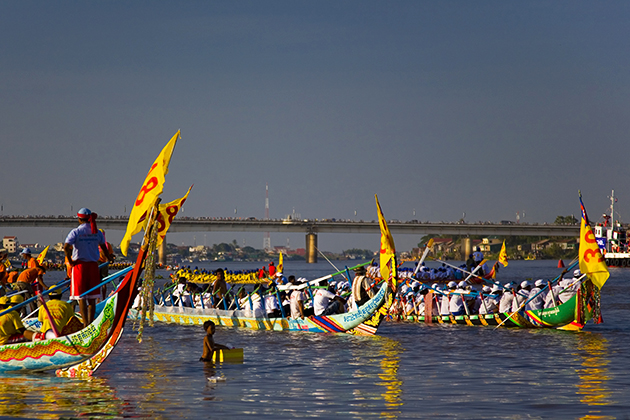