Culture and Architecture are two categories that interacted and affected each other. Be affected by Indian culture, the sculpture and architecture are the hallmarks of the grandeur of the temple architecture in the tiny country-Cambodia. To create the uniqueness of Cambodian architecture, it should mention the following outstanding architecture: 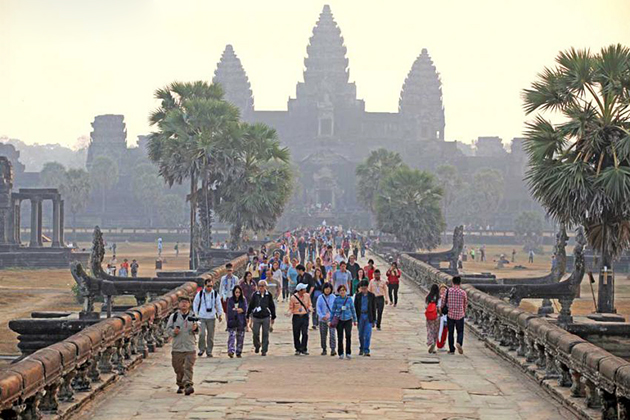 Recognized as a World Cultural Heritage by UNESCO in 1992, Angkor is considered to be the most important archaeological park in the world and the capital of the Khmer empire from the ninth century to the fifteenth century. This complex covers an area of 40000ha, including temples like Angkor Wat, Angkor Thom, Bayon Temple, and some other architectural sculptures. The original purpose of the construction of Angkor Wat was to make the Hindu temple of the Khmer empire, but in the XII century, the Khmer people turned it into a Buddhist temple. To date, Angkor Wat is still considered as a Buddhist center in this region, even though UNESCO has established a program to protect the building and the environment around it. Talking to Cambodia, people think of the fascinating Angkor Wat architecture. 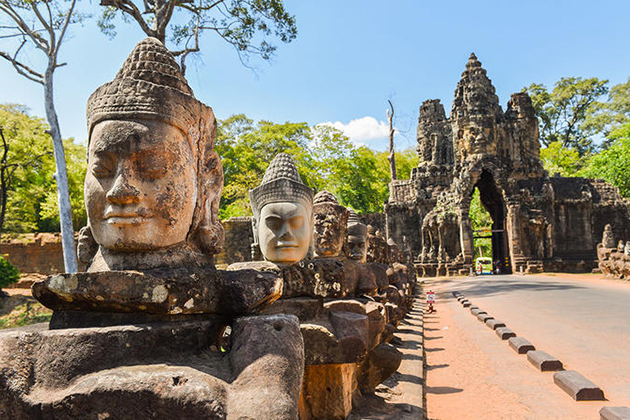 Angkor Thom is the last and longest capital city of the Khmer Empire. It was built in the late 12th century by King Giaiavacman VII. Angkor Thom also has the same mysterious charm as Angkor Wat. Angkor Thom is constructed in the Bayon style, indicating the size of the building, the main material being bees, the human faces, and the Naga statue at each tower. Angkor Thom is 1.7km from the north of Angkor Wat, the road to Angkor is extremely impressive: the two sides are the statues who embrace the body of the seven-head snake, about 700 meters long. There are 5 entrances to the city from 4 directions, the Bayon Temple is the center. The top of each entry is four giant faces carved into the stone. The South Gate is one of the famous landmarks of Angkor and also the main entrance for tourists.

Location: in the Angkor Thom

Bayon Temple, located in the center of Angkor Thom, it was built in the late 12th and early 13th centuries as the official temple of King Jayavarman VII. This is the most impressive temple of Cambodian temple architecture by means of the grandeur of scale as well as the emotions that it gives visitors. The temple consists of 54 large and small towers, each tower with a sculpture of the face of Lokesvara, or Avalokitesvara, which symbolizes the observation of the divine to the four directions of Cambodia. 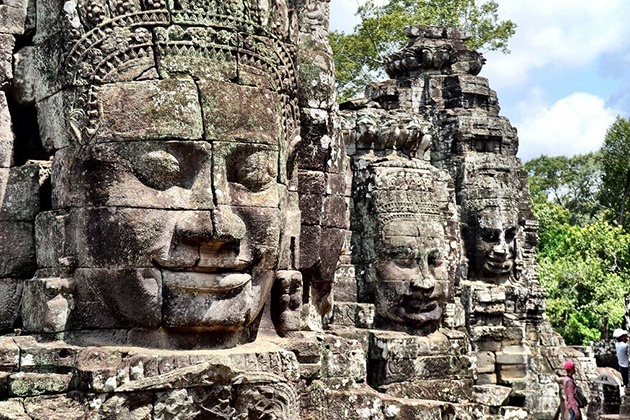 Bayon’s structure consists of three floors, all three floors are dilapidated, brick lay everywhere. Two downstairs arranged in a square, adorned with reliefs on the wall. The third floor is arranged in a circle with many towers whose faces are shaped like stones. The downstairs lobby is an art gallery with 11,000 sculptures engraved on a 1200 meter rock wall. The most outstanding visual of Bayon is the towering spires, carved into four faces looking four directions. Bayon’s architecture is considered as baroque, while Angkor is classical. 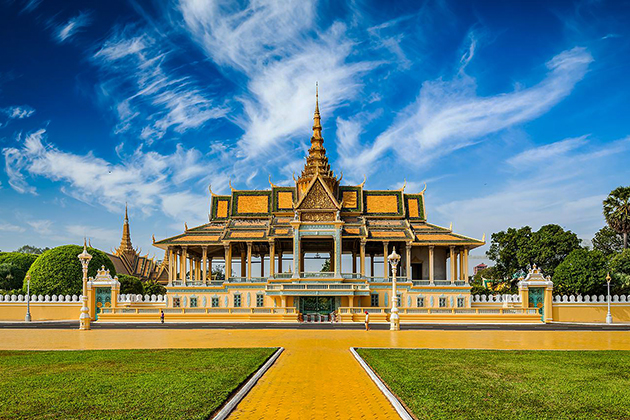 The Royal Palace of Cambodia is a complex of buildings where the Royal Kingdom of Cambodia was built more than a century ago to serve the monarchs, royal families, and foreign guests. It is also a place for courts, protocols, and royal ceremonies. The whole building is solidly built including many towering pyramids – a typical architecture of Cambodia. The entire building is separated from the outside by a wall. The interior works are elaborately decorated and carefully maintained with the flower garden. The Royal Palace consists of a complex of relics including the Royal Palace and the Silver Pagoda. It is a combination of many other architectural works and gardens with many decorative flowers that are many years old. Royal Palace and Silver Pagoda create an architectural ensemble that are symbols of Cambodia. The project turns to face the river, is an indispensable tourist spot in the journey to explore Cambodia. 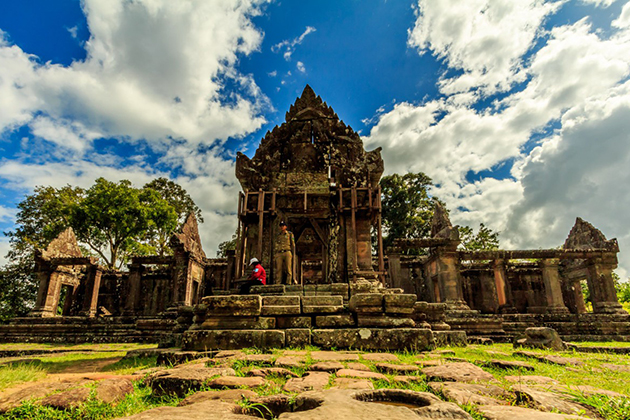