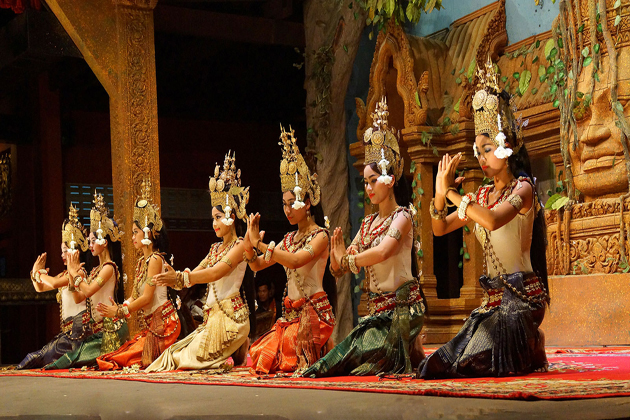 According to folk tales, Apsara is cloudy fairies and water fairies. When fairies play and dance, plants and animals grow, flourish. So Cambodian people worshipped Apsara as the goddess of prosperity. The most beautiful fairies are: Urvasi, Menaka, Rambha and Tilotama often appear in many works of poetry, music, paintings of Cambodia. They are also the owners of the bows and dances for the gods at the feast of demonic victories. Each time, there are 26 girls dancing together. According to the mysterious dance of the fairytale, the Cambodian people created the Apsara fairy dance performed on the holidays praising the merits of the gods and the Royal.

Born at least 2,000 years ago, the Apsara dance has its origins in ancient times and the ups and downs of the history of Cambodia. Nowadays, the Apsara dancers perform on the modern stage is reduced, the dance is more comfortable and freestyle than the traditional dance but still retain the characteristics. During the performance, the Apsara dancers dressed in yellow and Sampot dresses also decorated the yellow cap of the tower. The dance was performed by the female dancers lightly, gracefully, gracefully on the slow music, the Pinpeat Orchestra is like the fairies are walking in the garden bright pink sunshine.

Dance for many centuries became royal court dance, and then danced the familiar dance of women in the holidays, festivals and weddings. Apsara is now the property of the Cambodian national spirit, the dance that expresses the desire for a prosperous life, expressing the beauty of nature and Cambodian people.

Baok Chambab is the traditional wrestling of Khmer people. It is a three-round match. Before the competition, the wrestler must perform a ritual dance. If someone wins 2 of 3 rounds, he will be the winner of the match. A traditional Cambodian Baok Chambab match is accompanied by a drumbeat. When booking a Cambodia tour during the New Year or the festival, visitors will have the opportunity to see this kind of interesting traditional art. 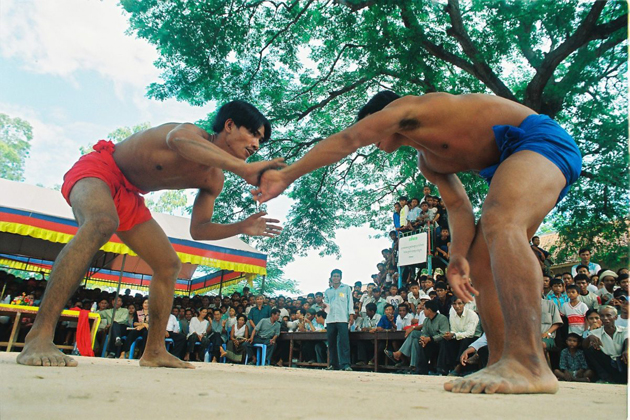 Apart from the Royal Apsara dance, Cambodia has many folk dances. They are often fast-paced and performed at festivals. The most popular Cambodian folk dance is Robam Trot. It’s like a hunter chasing a deer. Robam Trot gets people jumping in the New Year with the meaning of banishing the unlucky ones. Besides, another folk dance is Sneak Toseay. This is a dance that depicts the image and movement of animals such as peacocks or tigers. 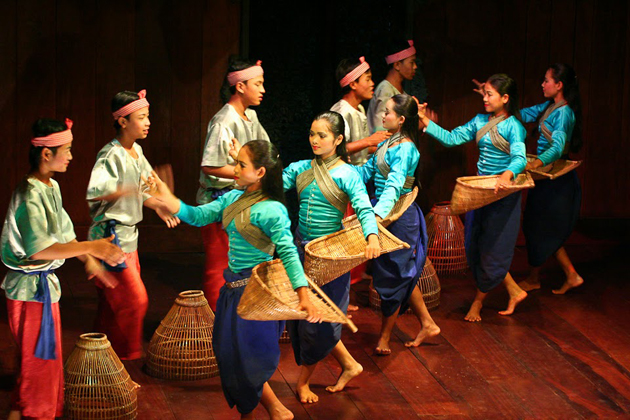 Bokator, or more accurately, Labokatao, is a Cambodian martial art that can be dueled and can use weapons. 1000 years ago, Bokator was used by the Angkor military as a form of combat. The term bokator is translated as “beating a lion” (from “bok” means “to dam”, and “tor” means “lion”). According to the legend of the Cambodian, about 2,000 years ago, a lion attacked a village. Then there was a warrior with a single weapon, a knife and only his knee could have killed the lion. Then the warrior recreates the tactics he used to deal with the other. Slowly the technique is used by many to fight wild animals. And today it has become a typical martial art of the Cambodian people. The bokator uses the power of the elbows and knees, kicking the legs and fighting on the ground mainly. Although using the knees, hands, elbows, feet, forearms, and foreheads, but even the shoulders, hips, jawbone and fingers can be used to recover even fatalities death for the enemy. 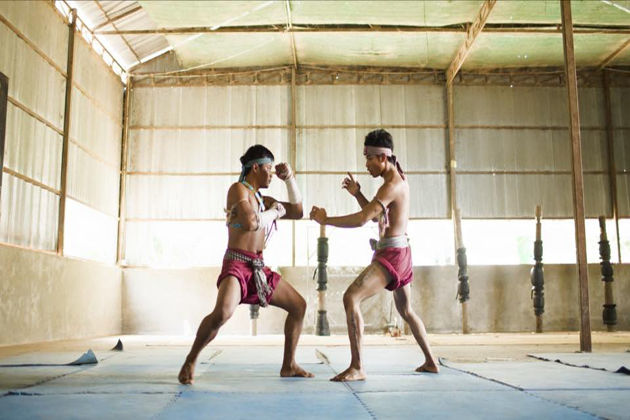 Sbek Thom is a traditional ball-puppet show with dancers, puppets, a curtain, and a narrator who works together in traditional music to create a distinctive and engaging show. In the past, Sbek Thom likes a religious ritual performed only in worship for special occasions such as “Khmer New Year’s Day”, the King’s birthday or to pay homage to with some celebrities. However, Sbek Thom developed into a form of performing arts later on. Sbek Thom artists perform excerpts from the Reamker School (composed of thousands of verses, borrowed from the “Indian epic of Ramayana”), or sometimes Buddhist stories. 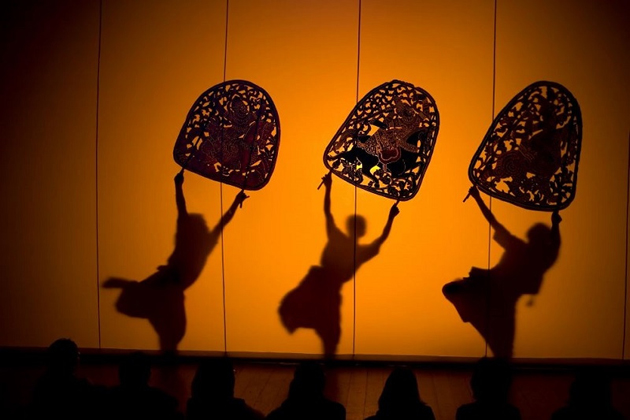 In most of the puppetry in Asia, the puppets are human beings, small animals with relatively small limbs, however, the small brown puppets in the Sbek Thom art Cambodia are the big picture of cow skin, 1-2m tall skeleton, almost round, characters in the Reamker Trilogy carved in the frame. In addition to these large leather puppets, there are smaller puppets, sometimes even moving bars. During the performance, the puppets were illuminated on a transparent canvas screen about 10 meters wide and 4 meters high mounted on a pole about 2.5 meters above the ground. The musicians of the Cambodian chord band are in front of the screen. Sitting and sometimes standing in the middle of the orchestra are storytellers, who read and sing songs along with the puppet movement.

The famous Sbek Thom troupe was active in the first half of the twentieth century, one in Phnom Penh and one in Battambang. Later, the Cambodian government set up several other SBS Theater theatres across the country as a way of preserving, preserving and developing this type of culture. Today, Sbek Thom is often associated with dance and other forms of theatre in modern content as well as in travel programs.

As a country with a long Khmer culture, Cambodia has a wide variety of traditional arts. For a tour of Cambodia, if you can not see directly, you can see the reliefs of the temple complex Angkor. They are delicately carved and clearly depict the traditional art forms of Cambodia.